So life has been somewhat busy since my last post.

The Great Tapestry of Scotland exhibition went well and here are some images. The exhibition was even used as a backdrop for a documentary on Scotland and independence by the BBC's Robert Peston. I also successfully staged 3 stitching classes which all went well. 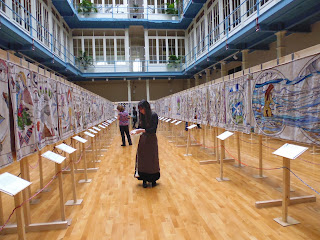 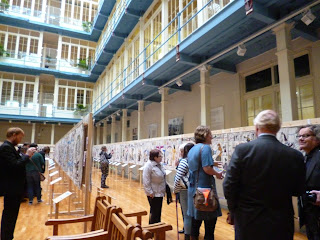 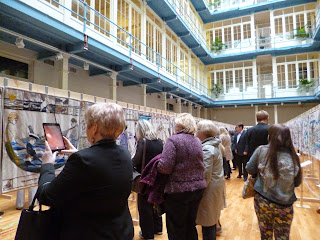 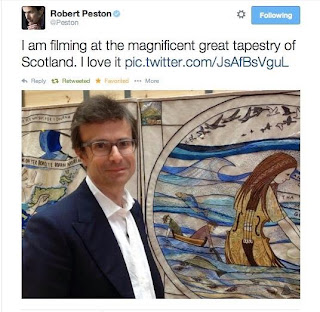 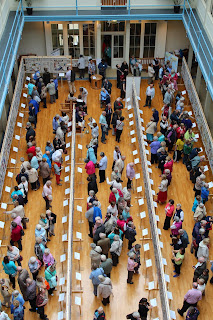 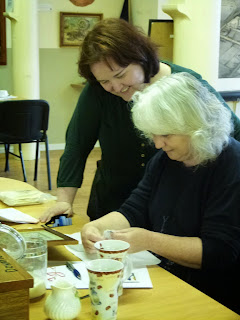 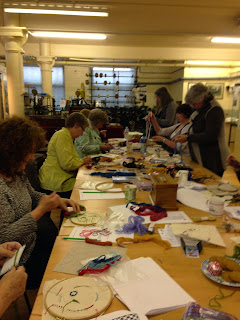 The panel I stitched on for the Scottish Diaspora tapestry is also completed and is already travelling around.  Here I am at the launch event with my panel. 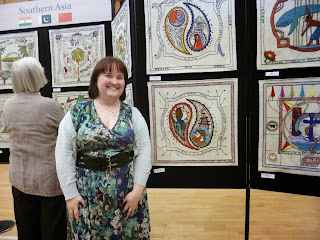 The past couple of months have been busy for other reasons though - meet Mr M who I met in August and is the most lovely and fantastic man.  Life is certainly a whole lot better with him around. 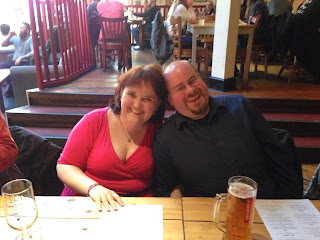 So goes the Carole King song. The album Tapestry came out in the year I was born and I heard it growing up. It's still a feature on my iPod now.

The past year has been a tapestry in both the metaphorical and literal senses and Tapestries are a huge part of my life right now.

Recently I've spent quite a bit of time stitching on a panel for the Scottish Diaspora tapestry. 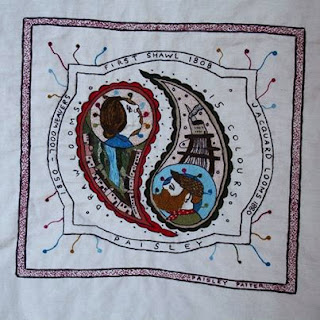 Other stitchers in the same group stitched this panel. 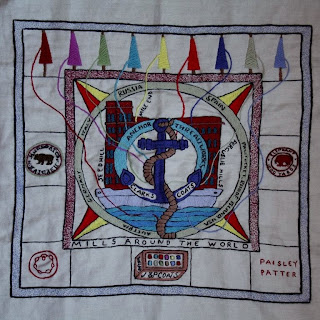 In September, the whole tapestry is coming to Paisley to visit for an exhibition which I'm helping to organise.


However the Tapestry that is taking up a lot of time is already finished and currently on display in Aberdeen. After Aberdeen, the Tapestry is coming to Paisley and I'm helping to organise the exhibition as part of the Paisley thread mill museum organisation and in association with a group called Weaving Musical threads and West College Scotland. There is a lot of work ahead but it's going to be a hopefully amazing exhibition with lots of other events, including stitching workshops. The exhibition will be at the Atrium at the old Anchor thread mill. 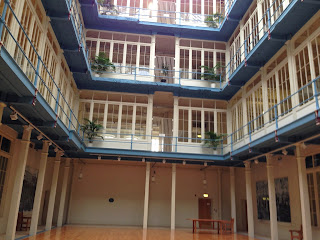 It's an awesome exhibition space and I know it will look amazing there. If you live locally, we need volunteers to help with visitors. If you are interested, leave a comment here and I'll give you further details.

The dark days of winter are here in Scotland and 2013 is coming to a close. Christmas this year has been a lovely family time after a long struggle to this year and brought a lot of closure. The man who killed my Uncle was convicted and sent to prison for a long time so we can now start to move on.

One thing that I've found a love for this year is colour or more specifically colour work. It's really not as scary as it seems. I've dabbled a little before but decided to dive in full force and knit Little birds by Ysolda Teague.

Which involved steeking or cutting knitting for the non knitters. Again not as scary as it seems.

I utterly love the cardigan and have worn it a lot.


The other big thing for me for the end of this year was the 50th Anniversary of Doctor Who. I started watching Doctor Who when I was very small and have loved the show since I first hid from the Daleks whilst they fought Tom Baker. So when it was announced that there would be an anniversary event in London on the day of the anniversary, I booked my ticket straightaway. There was of course, some pre event knitting.

The scarf even got to meet some Doctor Who companions - Lalla Ward aka Romana II who was my favourite.

And Jenna Coleman aka Clara Oswin

I met and listened to many other Doctor Who people which was really cool.
Posted by Paula at 6:33 pm 3 comments:
Labels: Doctor Who, knitting, life, London

Just over a week ago, the Great Scottish Tapestry exhibition opened at the Scottish Parliament. Unfortunately I couldn't make the formal stitchers' preview event due to a trip to London but I've been over to visit it a couple of times now.

I've taken a lot of pictures which you can see at my flickr album Each time I look at it, I see something else to marvel at.


Last Saturday, I took a tour of the Parliament whilst I was visiting. For those who aren't familiar with how the UK is set up, Scotland remains part of the UK but certain issues are devolved to government in Scotland to deal with. The building itself has a controversial history - it took longer than expected to build, cost more and has had issues with beams falling. The designer of the building and the first minister of Scotland both died during the project build.

It is a lovely building and full of light, which is hard thing to achieve when it's rainy day in September in Edinburgh

There are so many panels that it's hard to pick out favourites. I love this one -panel 107 the Paisley lady

Panel 93 - Scots in India is another favourite

Panel 140 Cumbernauld is a great one, especially as it depicts a scene from classic 80s Scottish movie Gregory's girl which was set there

In November, a book of all the panels is going to be released and the Tapestry is going to be displayed elsewhere in the UK and in the USA/Canada hopefully in 2015. The panel I stitched on grew out of oral history project to record the stories of the people who lived in Paisley between the 2 world wars. A film has been made which is now online and hopefully the link will work below.

The past month or so has gone pretty quickly.  We've had some actual summer weather which was fantastic and life is continuing on as before.
The Paisley 1930s panel is completed and we are just waiting for the exhibition at the Scottish Parliament next month.
The final panel looked this. 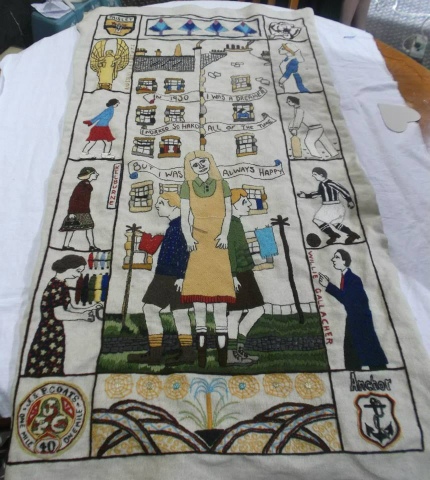 I'm really looking forward to seeing it all together in one place.
The past few weeks have brought some challenges too. My ongoing hand issues have turned into something a little more serious and just over 4 weeks ago, I was found to have a prolapsed disc in my spine.  Thankfully no surgery is required but the cure is time, rest including no exercise and painkillers.  I'm a fairly recent convert to the whole gym/exercise thing but the not being able to go the gym is some thing I'm finding tough, largely because it worsens my insomnia. Things are gradually improving and I'm hoping to be back at the gym in about 4-6 weeks.
Posted by Paula at 10:00 am 3 comments:
Labels: Great Scottish Tapestry, health, life

Follow my blog with Bloglovin
Posted by Paula at 7:09 pm No comments:

Again I spent yesterday with the Paisley great Scottish tapestry panel group stitching. This was the last Saturday of stitching on the project as its almost finished. There had been a lot of progress made in the past few weeks and yesterday. This is how the project looked at the end of yesterday's stitching session.

As I've done for quite a few times, I brought the project home to stitch on last night and today. This is how it looks now.

And some close ups

The rest of the group are working on it further on Wednesday afternoon and should finish it then. The next time we see it will be probably at the Scottish Parliament in September. From what I understand the original plan was that all the stitchers would be invited to the opening of the exhibition but the number of stitchers has doubled since then so we are waiting to hear what the final arrangements will be.

Whilst the panel stitching is over, the plan is for the stitching group to continue. We are going to be taking part in a project called the Scottish Diaspora tapestry and will be stitching panels for this. There is also some early discussions about developing a project about Paisley and Renfrewshire, documenting our history in stitches as there are many tales to tell.
Posted by Paula at 8:49 pm 2 comments:
Labels: 2013, Great Scottish Tapestry, heritage, history, Paisley patter, stitching
Older Posts Home
Subscribe to: Posts (Atom) 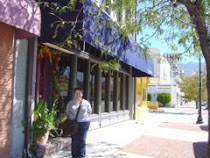 Paula
I'm a cross stitcher and knitter. Slightly obsessed with sock knitting. I live in the very damp West side of Scotland where it is usually raining.